The ‘Battle Royale of Crypto’ Debate: Who’s Right, Who Wasn’t

The ‘Battle Royale of Crypto’ Debate: Who’s Right, Who Wasn’t 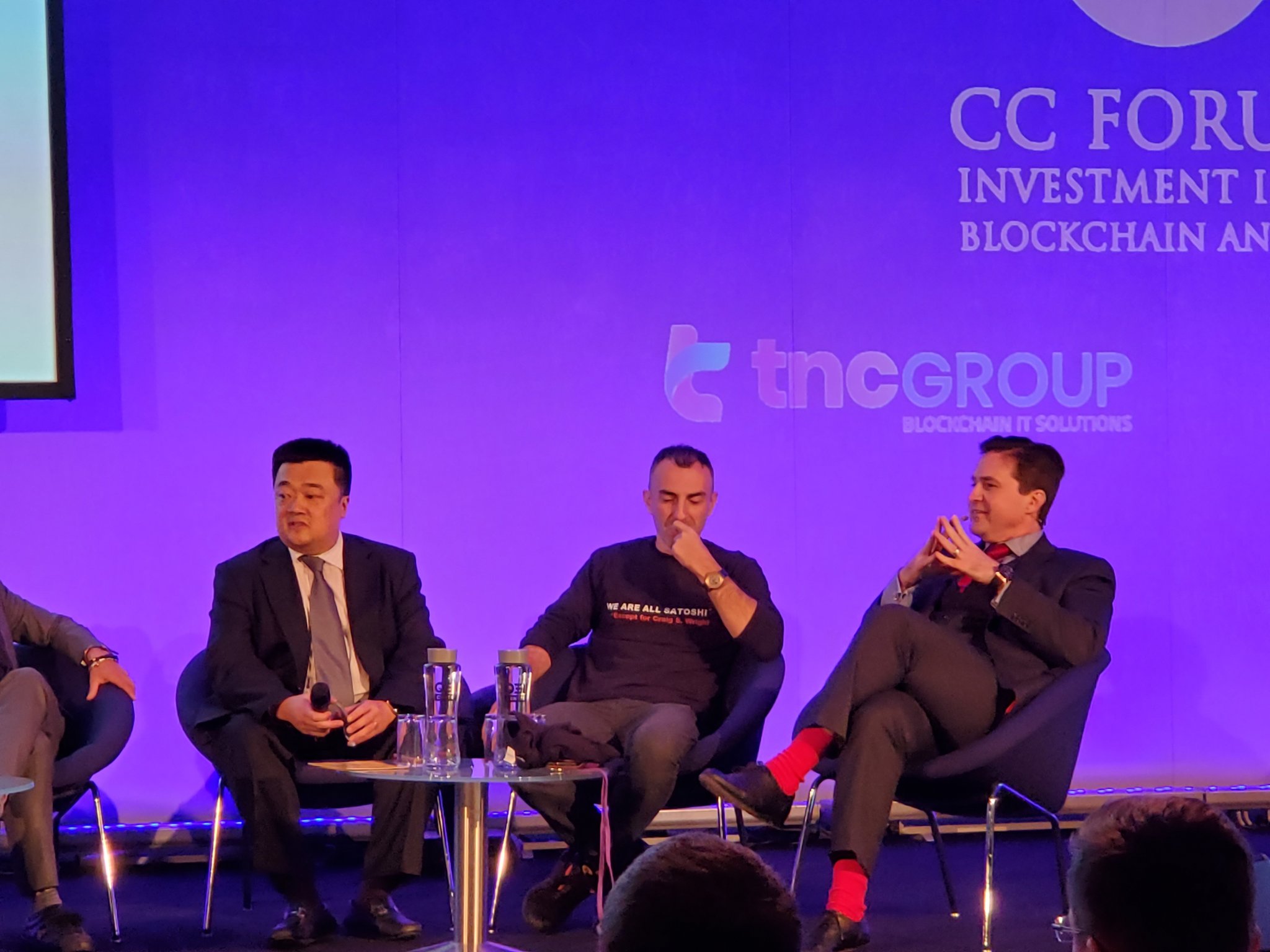 (First off I wanted to write this here, and not on Twitter, because well, it is sort of a low-pass filter. (That’s a noise filter, for those not of electrical engineering bent.) By putting my thoughts here, I can both achieve the goals of having more words to express them, and also by way of putting most of what I have to say past the 280 character mark, I ensure that the troll bots and the low-brow paid shill armies who sybil-attack the Twitter feeds of people they want to subvert won’t make it this far. In fact if you have read this far, you likely aren’t a zombie, are either intelligent or at the least have an open mind and are willing to read critical thoughts without your lizard brain triggering a fight or flight response.)

About the debate and its participants

Now then, since we have only the civil homo sapiens left here, I shall go on to my points.

Let’s give a bit of background on the panel debate. It was ostensibly on “The Global Centralised Financial System: What Are the Flaws & Challenges and What Are the Possible Solutions?”, but the discussion quickly broke down into those that would defend the existing financial systems, those that want to improve them, and those that want to throw it all away and start from scratch.

But first, let’s go over who the proponents are. Nouriel Roubini is an economist and a lecturer at the NY Stern School of business. He is nicknamed “Dr. Doom” because he is very vocal against cryptocurrencies, and has stated that they currently serve no use except as a cheap pump and dump asset — much like how penny stock markets are used, basically speculative gambling. Brock Pierce is a old bitcoiner and angel investor. He was also one of those ‘eccentric’ characters, and has a strange past which is marred with allegations of child sex abuse, and other scandals. As well as being a member of the Bitcoin Foundation (and whose appointment there caused several others to resign) he was one of the founders/supporters of the Tether platform, which is a stablecoin that has recently been in battles with the NY attorney general’s office on charges of impropriety in its dealings with its partner company, BitFinex and its parent company iFinex. Bobby Lee, ex-CEO of the now defunct crypto exchange BTCC, is also a director of the Bitcoin Foundation. Tone Vays is a loud proponent of Bitcoin, and is a self-proclaimed Bitcoin Analyst. He gives talks about how to trade crypto assets and do technical analysis. He is a vocal advocate of taking money out of the government’s control, and he sees BTC as its only champion. And finally Dr. Craig S. Wright, inventor of Bitcoin and chief scientist at nChain, which holds the most blockchain patents in the industry. With such a matchup between one established business person, three early adopters, and a technical expert of Bitcoin and computer security… what could possibly happen?

More a shouting fest than an on-topic debate

The moderator had no ability whatsoever to keep debaters on topic, several times the discussion degraded into a three-way shouting fest, which was entertaining and disappointing at the same time. In addition, the audio was not of good quality and it was hard to hear what people were saying most of the time, especially Roubini.

Nevertheless, as I see it, the main proponents had pretty much the following arguments:

Brock Pierce: Played the “neutral, let’s let innovation show us the way” role. Many projects will fail, but we must forge forward and innovate regardless.

Bobby Lee: Central banks and inflation are bad, unfair, and unconstitutional. Also, Lee speaks like Geraldo Rivera in an aggressive interrogative fashion that made it hard for anyone to answer him. BTC is not a shitcoin because… (no real reason given, presumably because of the value appreciation over 10 years) and USD is a shitcoin, because of inflation over the last 80 years.

Tone Vays: Crypto is an asset, and is private and the government can never take it away from you, and that’s why it is valuable. And the only crypto is BTC, and nothing else will work (no real reasons given for that assumption). Also debt based economies are bad.

Craig Wright: Crypto must abide by existing laws, money in the form of past gold isn’t debt free, and also money needs to be traceable (in the legal sense). BTC’s Lightning Network doesn’t keep records, and thus will never be allowed at scale (legally), and even if it were, he has already patented the technology.

Who was right, and why?

So if we were to ignore all the ad hominems, and the constant badgering by Bobby, we see that what we have is three reasonable people who have some strong opinions, and two fanatics who wish to tear down the existing financial systems.

Craig Wright in fact has manoeuvered BSV to be the only viable alternative in cryptocurrencies. Every other coin would simple be illegal, stigmatized, or can’t scale and compete, and thus Roubini would be right, they are all shitcoins.

Roubini wasn’t allowed to answer Bobby’s badgering question of why USD isn’t a shitcoin despite its inflation, but it isn’t hard to see how Roubini is right and Bobby is wrong here. Sure, USD may have lost value by inflation, but Bobby’s argument fails to consider that if wages have kept up with the rate of inflation that makes up for the loss of value. And we can clearly see how this is the reality, as we can see statistics of how unemployment and poverty rates have dropped since the 1930s. So clearly, Bobby is making a straw man argument that a non-economist would make, looking at one simple numerical figure and claiming that there is a problem when there isn’t one.

Roubini however is right in saying that BTC and in fact all crypto is a shitcoin right now, vis-a-vis USD. Because you can’t spend crypto as you can USD in the real world by any real measure. Despite all the merchants that the mainstream crypto media like to exalt, the fact of the matter is that it is insignificant compared the purchasing power of USD or any fiat currency, even Zimbabwe dollars. Even Venezuelan bolivars! (Yes, even though bolivars may lose value daily, it is still valuable as a medium of exchange, even though something else is normally used as store of value in Venezuela.) So Roubini’s point is that if you don’t have a utility in medium of exchange that’s at least as good as a fiat currency, you are a shitcoin. He isn’t wrong.

At the end of it, the arguments of Lee and Vays are those of revolutionaries. They whole movement depends on them being able to convince a majority of the law abiding, non-criminal element of society to support their cause, and defy the law. If they fail to do so, then they will have achieved nothing, because their vision for cryptocurrencies involves breaking the law or the existing establishment is some form or another.

Lee wants to break governments’ role in setting monetary policy and controlling the economy, and Vays wants to break governments’ ability to properly police criminal activity. Roubini is a skeptic and is deflating a lot of the crypto hype, which is good in its own right (skepticism is rarely a bad thing). And Pierce is playing it safe. Wright is trying hard to convince people that the only way crypto will be adopted is by abiding by laws and working with existing institutions and governments.

So it basically boils down to this: do you want to be a criminal, break the law in the name of the cult of BTC, in the hopes that if enough of you do it, that the government will relinquish its hold on power and allow its mandate to protect the public to slip into delinquency in a bloodless silent revolution (Lee/Vays) — Or do you believe that crypto can achieve its goal of being a global money and obeying the laws of the existing government institutions at the same time? (Wright), or do you think the whole thing is futile, and just a big waste of time and money? (Roubini), or do you think we should try everything and just see what will stick? (Pierce)

Only time will tell.

Sorry, Bitcoin can be confiscated

One thing is for sure, when Vays made a statement that basically based his entire argument on the fact that Bitcoin cannot be confiscated, Wright added a side comment that in a year’s time he will find out how wrong he is.

This, if true would spell the end of Vays’ Bitcoin (BTC). For if being ‘un-confiscatable’ is the only reason for its value, simply having it done will reduce that value proposition to zero. And if you think about what Wright said, that if mining pools are all companies, operating in jurisdictions that would cooperate with worldwide freezing orders, then it is really just a matter of time before some mining pools are ordered to freeze certain addresses from issuing transactions in order to lock funds on the blockchain. That would kill all the cypherpunks’ dreams of state-independent money in one simple court order.

That’s if BTC ever ends up getting its Lightning Network working at scale, since Craig let it slip that he had already has the patent on LN’s basic technology granted. This means not only would LN have legal complications in terms of being compliant with regulations on storing all transactional data, it may also have systematic legal issues with patent infringement.

2020 is shaping up to be an exciting year in crypto. Let’s wait and see.